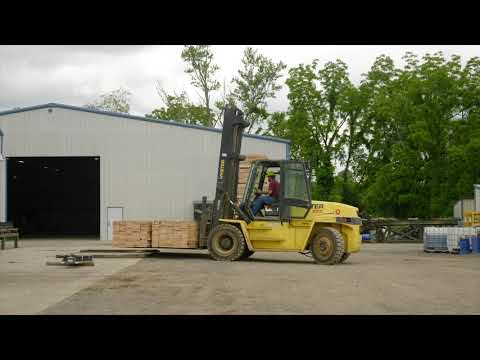 The Story of Long Island Lumber

Long Island Lumber had it’s beginnings in June of 2001 in a borrowed cow pasture with a few packs of 2×8 white oak lumber, a few nuts and bolts, and a nearly blind 16 year old young man with a cordless drill.

Let me give you a little background…..Myron was born with a genetic eye condition called Leber’s Congenital Amaurosis, which damaged his retinas while he was still in the womb. He was mostly home schooled by his mom, Mary, who did an outstanding job teaching him in spite of his vision problem. Among many other innovative things, this included copying a single, simple math problem on a full size sheet of paper with a wide tipped black magic marker. If Myron held his nose almost down on the paper, he had just enough side vision out of one eye to work the problem. When the time came for algebra, Mary had to tape several pieces of paper together to give room for the algebra problem!

As the years went by, Myron’s vision slowly decreased even more. When he was 15 he began wondering in earnest what he could do in life with his disability. Mary well remembers him crying on the couch one day, extremely discouraged about his chances for gainful employment. But he was very determined that he didn’t want to sit at home and depend on a check from the government to survive.

I was logging at the time and began to notice the wooden mats that the loggers were using to make temporary roads thru wet areas for their trucks. I came home one day and mentioned the idea and it grew from there. We built a simple jig to lay out the boards for the mats in the borrowed cow pasture. Myron would build a couple mats a day, moving them off to the side with a borrowed skid loader. Then every couple days or so I would stop by to trim the ends and stack them up. When we would get a load completed, a local trucking company would drop off a flat bed trailer and we would load the trailer one mat at a time with the skid loader. The mats were 10 feet wide and wouldn’t balance on the short skid loader forks so we had to chain each one on. So Myron would ride on top of each mat so he could unhook the chains while I drove the skid loader. He fell through once and caught his leg on a bolt and required 14 stitches. ( I’m hoping OSHA’s statue of limitations has run out by now!)

After awhile, Myron was able to purchase an old John Deere forklift, which was a big improvement. We also leveled off a spot at home (now the site of the Long Island Lumber office and sawmill) where Myron could work. This sure beat being all by yourself in a lonely cow pasture all day! Up to this point everything was still done out under the open blue sky with maybe a piece of plastic stretched between a couple trees to shed a little water. What usually happened though, was that it just saved up the water for awhile and then dumped it all on you at once.

By this time Myron usually had another young guy or two helping him. I remember well one winter the guys were working in the snow trying to finish up an order. And you can’t wear much in the way of gloves when you put the nuts on the carriage bolts. Myron would come in the evening with a distinct line on his wrist where his jacket stopped. His hands were red and raw from there down.

Over the next couple of years he was able to put up a small pole barn shop and Long Island Lumber continued to grow. In 2007 we added an addition to the pole shed and put in some simple equipment to put together the timber mats, called crane or bridge mats. By this time there were two full time employees. In the spring of 2009 a portable band mill was added to provide lumber for the logging mats and also the longer timbers needed for the bridge mats. Up to this point I had still been logging, but around this time Myron was wishing for more help from me, so I stopped logging and joined forces with him as a minority co-owner. The decision was pretty much a no-brainer; I told several people that when you see someone that the Good Lord seems determined to bless, you better get on the wagon!

Let me give you one example….Back in the days of the pole barn shop we were desperate for space; we only had an acre and a half, which included our house site. So we went to the neighbor lady and asked if she would possibly consider selling us five acres. (there are over 700 acres on her farm; surely she wouldn’t miss five, would she?) She said she would think about it. Several days later she came back with her answer. She said her father had always told her to never start dividing up the farm and she couldn’t bring herself to go against that. My heart sank.

But then she proceeded to open her Bible and read the verse from 1st John 3:17 where it says, “If you see your brother in need and shut up your bowels of compassion against him, how dwells the love of God in you?” So she went on to say, while she can’t sell,  she wants to let us to use her land. We went together to a lawyer where there was a lease agreement drawn up. Myron has a 20 year lease and then an option to renew it ten years at a time for another 20 years. He has first option to buy if the heirs would decide to sell. And what is the lease payment? Brace yourself; are you sure you are ready for this? ONE DOLLAR A YEAR!  It about brings tears to my eyes even after all these years. (now do you possibly see what I mean about the Lord’s blessing?)

After running the small band mill for three years we put up a building and put in a much larger band mill. Also, over the next several years two additional production facilities were added. One yard is seven miles from the sawmill where we assemble and store our crane and bridge mats. The other facility is in Floyd, VA where all the logging and laminated mats are built. We have a cut up line there as well, which allows us to produce many varied products such as specialty pallets, pipe skids, stakes, batten strips and potato boxes.

Since 2009 our mill has gone thru a number of upgrades, the most major one being in 2017 where we basically gutted the entire setup and put in a system capable of sawing up to a 40 foot log. We installed two Cleereman carriages; when we are sawing under 20 foot logs, we just use the single carriage and then anytime we are sawing over 20 foot, we hook the two carriages together.  Also at this time we also took the plunge and put in an optimized edger and state-of-the-art scanning technology on the head rig. These upgrades have done amazing things for our production capabilities and sawing options.

To say the least, Long Island Lumber has grown beyond our wildest imaginations. Gone are the days when Myron was purchasing agent, salesman, day to day production manager and still helping to build mats! Today we have excellent people in all those positions and Myron fills the role of President, spending his time watching over the finances  (or lack of them!) and the long term vision of the company. One notable development on the personnel side of things: Steven Yoder, who started out managing our Floyd operation in 2012, has steadily taken on more and more responsibility in the day to day management and now is filling the role of Chief Operations Officer. Also, he is currently in the process of buying into a percentage of ownership. Steven has certainly been a godsend to Long Island Lumber.

I must say one thing more before I sign off. There is one more presence that I should have mentioned in the beginning of my tale, along with the lonely cow pasture, the boards, the bolts and the blind young man. I believe that God Almighty was looking down and providing His direction and blessing, for which we are continually grateful. In fact, thinking back, He must have been smiling that day when Myron lay on the couch, crying about his slim chances at employment. Not only does Myron have a job, but currently Long Island Lumber provides employment for 40 plus other men and women.

It’s almost enough to make a guy believe in miracles.